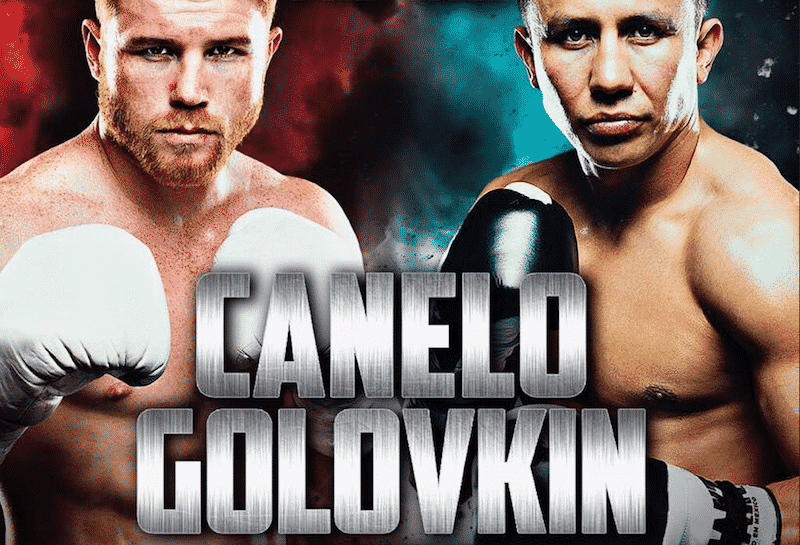 Gennady Golovkin and Saul Alvarez will meet in Las Vegas this weekend to put on what will be the true boxing match of the year. Triple G will be putting his undefeated record and four middleweight belts on the line Saturday evening as he faces the hard-hitting Mexican best known as Canelo.

In addition to being two of the best active boxers in the world, both men are known for their power and heart. This should be one the most exciting boxing bouts we’ve seen in quite some time.

Triple G enters this fight with a perfect 37-0 record made even more impressive by a knockout rate approaching 90%. More often than not, Golovkin opponents fail to last the distance. Triple G is a knockout artist of the first order and will be putting that impressive resume up against his most dangerous opponent to date.

Saul Alvarez, whose nickname Canelo is Spanish for cinnamon owing to his red hair, enters with an impressive record of his own at 49-1-1 with 34 knockouts. The only blemishes on an otherwise spotless record are a draw way back in 2006 and a decision loss to Floyd Mayweather in 2013. Since then, Canelo has won seven straight fights with four KOs.

In a fairer world, this would be the fight we had spent the last two months discussing with great anticipation. That other fight stole the headlines due to the name recognition of both participants and the novelty factor of pitting one of the best MMA fighters against one of the best boxers in a boxing ring.

Now that the other fight has come and gone, we can now turn our full attention to Gennady “GGG” Golovkin vs. Saul “Canelo” Alvarez. This is the real boxing super fight of the year and even if you got your boxing fill last month with Mayweather vs. McGregor, this one is most certainly worth a watch. This is the super fight between two of the best in the world in a way that Mayweather vs. McGregor never could have been.

It all goes down on Saturday, 16 September at 8 PM ET at the T-Mobile Arena in Las Vegas.

The oddsmakers favour Gennady Golovkin, but only by just a bit. This makes for one of the rare times in which you can bet on Canelo to win and actually get underdog odds.

This being a close fight makes alternative markets attractive as well. Online bookmakers are treating this like the boxing super fight it is and have published odds on all manner of outcomes.

Gennady Gennadyevich Golovkin (37-0, 33 KOs) is something of an enigma whose punching power has been hyped up to nearly mythical status by now due to 33 of the man’s 37 victories coming by way of knockout. Triple G has a well-deserved reputation as one of the hardest hitters in professional boxing.

His fearsome reputation in the ring lies in direct contradiction to his friendly-looking face and calm demeanor everywhere else. Being from Kazakhstan adds to the sense of mystery, as it tends to do for athletes from Eastern Europe. There’s just something about those old post-Soviet countries that produces some of the most formidable, inscrutable athletes.

Opposite him will be Saul Alvarez (49-1-1, 34 KOs), a Mexican boxer in both senses of the phrase. Canelo hails from Guadalajara and employs a style that is not only effective, but also super entertaining. He’ll take one to give one, always aims for the kill and is also known for having heavy hands.

Canelo has a lower KO rate at 67% (versus 89% for GGG) and an imperfect record, but he also has more experience at the professional level. Unsurprisingly, the GGG vs. Canelo betting odds are close and predictions are difficult to make with any confidence. Both men are hard hitters, full of heart and put on exciting fights. Both are also extremely skilled. This match has all the makings of a great fight – the type we remember fondly for years to come.

Saul Alvarez has the age advantage at 27 versus Gennady Golovkin at 35 years old. Both men are fairly equal in size with Alvarez listed at 5’9” with a 70.5” reach compared to Golovkin listed at 5’10 ½” with a 70” reach. Both have been fighting right in the range of 159 to 160 pounds over their last five fights.

Both are powerful and offensive fighters, but they do diverge a bit in style. Whereas Triple G relentlessly stalks his opponents and wears them down with brutal, unyielding punching power, Canelo is happy to bait his opponents in so he can counter with his own vicious counterattacks. Watching how each man deals with the other will be a real treat for the fans.

Some of you may be surprised to learn that Canelo and Triple G have actually boxed one another before – in a training environment and years before either fighter would become the superstar he is today. Back in 2011, a RingTV.com reporter drove up to Big Bear Lake in California to witness a sparring session between the two men.

Keep in mind, this was six years ago when Canelo was just 20 years old and facing a 28-year old GGG. Golovkin got the better of Canelo in that sparring session and made quite an impression on the reporter at the time. However, the reporter has since updated his original piece with some serious caveats warning the reader not to draw any conclusions from that one sparring session.

I don’t think we can take too much from a six-year old sparring session. Not only have both fighters matured and changed since then, but it was also a sparring session and not a real fight. The goal in sparring is to learn and improve, to try new things, to learn where you’re weak and to prepare for other, more immediate goals. An actual fight is a different beast.

At best, that long-ago sparring session is an interesting footnote. But it’s relevant to the topic at hand and is therefore worth a mention. Take from it what you will.

Predictions Contrary to the Betting Odds

Something interesting you’ll notice if you look up predictions from other fighters is how many boxers are predicting Canelo to win. This flies against the current betting odds which list Canelo as a small underdog.

Anthony Joshua, Floyd Mayweather, Tommy Hearns, Bernard Hopkins, Amir Khan and Johnny Nelson are leaning towards Saul Alvarez to various degrees according to the Telegraph. Sugar Ray Leonard was the lone dissenter who gave the edge to GGG, but even he hedged his bets by comparing the outcome to flipping a coin.

Things are a little closer according to the analysts at ESPN. Nine of them are leaning towards Canelo getting the win while five are predicting a Triple G win on Saturday night.

If you want to bet on GGG vs Canelo but aren’t loving the near-even money odds, you can go with something more specific to ripen the potential payout. Predicting who will win is tough enough; picking the winner and method of victory is even more difficult.

However, CBS Sports points to an interesting computer model that has demonstrated uncanny prediction abilities when it comes to previous fights. This model, which has correctly predicted not only many past winners but also margins of victory, offers several predictions for Saturday that you just might find useful.

This computer model has predicted every one of Floyd Mayweather’s fights and gotten the margin of victory correct almost every single time. It also predicted the shock upset of Tyson Fury over Wladimir Klitschko in 2015.

The Ultimate Fighting Championship heads to Australia this weekend to put on a fight card stacked with local talent and headlined by a heavyweight contender fight between former champion Fabricio Werdum and rising Polish fighter Marcin Tybura.

Post by: Mike Philipps The most famous golf course in the world takes center stage of the sports world this week as Augusta National (par 72, 7,435 yards) in Augusta, Georgia hosts the 2018 Masters Tournament for the 82nd time. The season’s first major quickly approaches as thousands of patrons descend on its hallowed grounds.

The NFL is now officially in postseason mode and that means every game carries great significance. The first Wild Card games are less than a week away and then we’ll start to narrow it down until only two teams remain. Not only are we in store for some great television, but there will be football…

What: UFC 194 When: Saturday, 12 December 2015 Where: MGM Grand Garden Arena in Las Vegas UFC 194 is shaping up to be one of the best fight cards we’ve seen in a long time. It’s not just the huge main event that makes this such a promising card; but almost every fight on the…

The Ultimate Fighting Championship returns once again to Las Vegas for a pay-per-view event featuring two title fights as Tony Ferguson and Kevin Lee do battle for the interim lightweight title and Demetrious Johnson looks to set a new UFC record as he defends his flyweight title against Ray Borg.

Opening Day of the 2016 MLB season is Sunday, April 3rd. Your city may also have its own opening day for the first home game of the year, but this weekend we get to see the very first regular season games. The Pittsburgh Pirates, Tampa Bay Rays and Kansas City Royals will host the St….