Notice: Our Sports Interaction review is based on personal opinion only. This is not official promotional content. 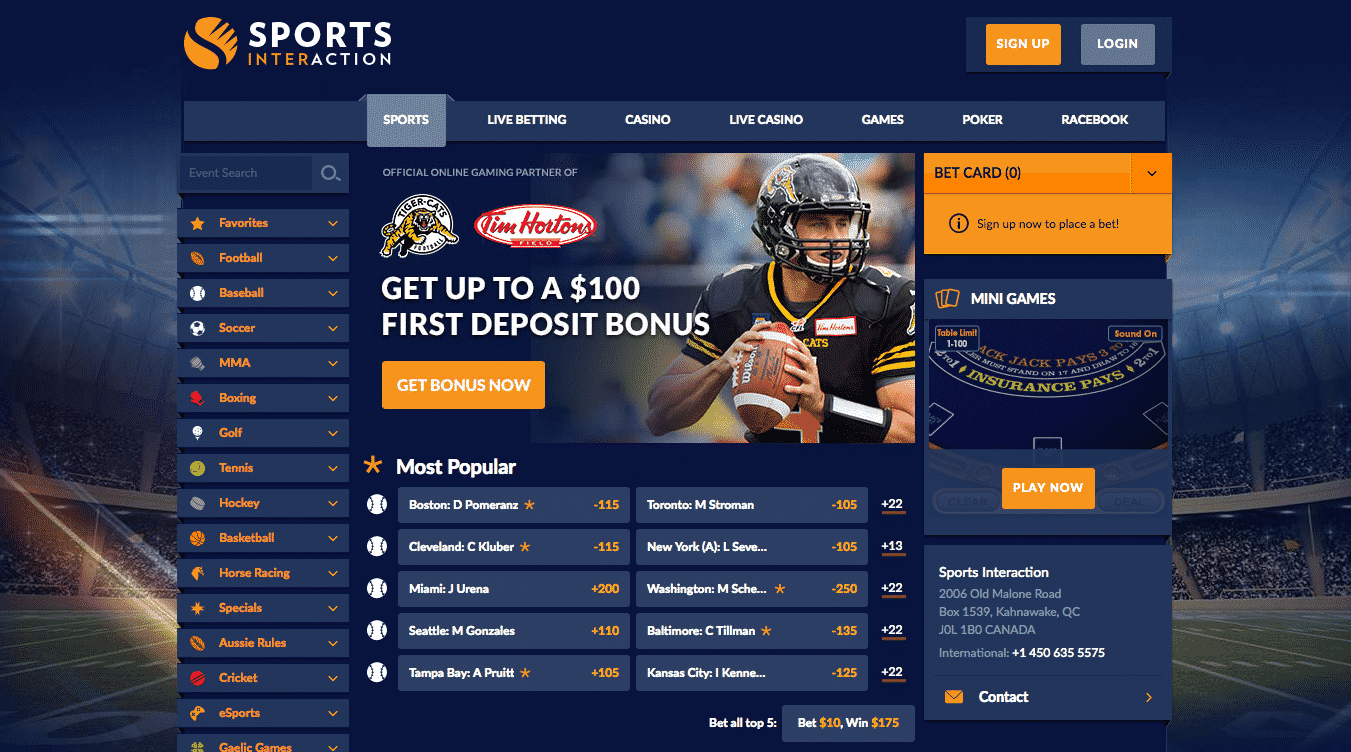 Sports Interaction is an all-in-one betting site that focuses exclusively on the Canadian market. By Canadians and for Canadians, Sports Interaction provides sports betting, casino games, online poker and racing betting all under one roof.

SportsInteraction.com holds the unique distinction of being the first online sportsbook to be licensed and regulated in Canada. Whether or not this is technically true is open to debate due to Sports Interaction being licensed on Mohawk territory by the Kahnawake Gaming Commission. In either case, Sports Interaction has a long-standing reputation for taking care of players and serving as a safe place to bet online.

All of this leads to our chief complaint, which is that Sports Interaction is very limited in where it does business. If you live anywhere other than Canada, you will need to look elsewhere to do your online sports betting.

The remainder of our Sports Interaction review will now focus on the actual experience assuming you live in Canada. We will discuss the online sportsbook, casino, poker room and racebook one by one in order to provide a detailed preview of what you can expect as a customer.

If the name didn’t give it away, Sports Interaction focuses chiefly on sports betting. Sports Interaction covers a full range of international sports with odds on all the biggest leagues both inside Canada and abroad. These include major international sports such as hockey and soccer as well as niche sports such as Gaelic games, beach volleyball and more.

Football, baseball, soccer and tennis are covered in great detail with thousands of bets available on any given day during each sport’s active season. At the time of this review, the football season was underway and Sports Interaction had nearly three thousand individual bets on offer for the NFL, CFL and college football.

Important games in the major sports are often subject to dozens of betting options for that one game alone. For example, a recent NFL game had 66 individual bets on offer ranging from picking the winner to predicting the first scoring play. The same also applies to major tennis matches, boxing bouts, hockey games and so on.

The best word to describe Sports Interaction’s coverage of sports is extensive. Here’s a full list of sports that can be bet on at SportsInteraction.com:

The standard welcome bonus for new customers at SportsInteraction.com is an extra 10% added to your first deposit for up to $100 CAD in bonus funds. For example, a first deposit of $100 will get you an extra $10 that you can use in the sportsbook and then withdraw when you’re done betting.

The match rate is definitely on the smaller side, but the good news is this bonus is easy to clear. All you need to do is place a total sum of bets equal to 3x your deposit plus bonus amount. To continue our example from above, a $100 deposit getting $10 in bonus money would require you to place bets equal to $330 before withdrawing.

It is not unheard of for Sports Interaction to increase its welcome bonus or offer new promotions for existing customers near major sporting events such as the Super Bowl and March Madness. Check the homepage during the lead-up to major events and you just might find something else worth grabbing.

Sports Interaction offers live, in-play betting just like other major bookmakers. If you check the in-play schedule at SportsInteraction.com, you will find they offer what amounts to continuous live betting. Dozens and dozens of events are scheduled for each day of the week across many sports for non-stop live betting.

The betting options for live events are updated in real time and consist of a pretty standard array of bet types. These include constantly-updated point spreads and over/unders, first half and second half totals, first team to X points and much more.

The one big thing missing here is live streaming video. Sports Interaction does not offer online viewing of sporting events like other sports betting sites.

However, the live betting interface at Sports Interaction does go a long way to negate the lack of streaming video. Whenever you enter an event’s page while it is live, you receive constant updates not just on the current score, but also what is actually happening in the game. For example, you can watch online as free throws are made or missed, see where points are being scored on the field and more.

One of the major selling points of the live betting interface at Sports Interaction is they actually offer play-by-play betting during games. Most betting sites only update their odds on the full match or maybe on scoring totals at the halfway point of the match, but Sports Interaction gives you real and immediate wagers such as whether or not the next free throw will be made. This is a major plus and sets the sportsbook apart from most competitors.

The casino at Sports Interaction consists of roughly 90 Playtech titles with a standard assortment of slots, table and card games, video poker games, keno and novelty games and instant win scratch cards. Slots, card and table games account for the largest chunk of gaming options with 53 slots in total and 16 table and card games.

All casino games can be played right inside your browser, no download necessary. This holds true for mobile users as well as anyone on a desktop. If you do want to download, Sports Interaction also has a PC-friendly option.

The minimum deposit to claim your bonus is $20 and it comes with a 30x rollover. This means if you claim the full bonus amount ($100), you will need to place a total sum of wagers equal to $3,000.

Sports Interaction Casino has its strong and weak points. On the strong side, the game variety is adequate between the various slots, table games and others. These games are all powered by a reputable software provider in Playtech, so we know fairness and quality are up to par. If you enjoy Playtech games, you will be right at home at the Sports Interaction casino.

Additionally, the reliance on Playtech and Betsoft as their sole providers of games limits the variety in terms of style. Every casino developer has a distinct look, different features and so on. If you’re not big on Playtech or Betsoft, you will want to look elsewhere because that is all they have here.

The full list of games at Sports Interaction casino includes 53 slots, 16 card and table games, 8 video poker games, 8 keno and novelty games and 4 instant win scratch cards. These games are all available at a wide range of stakes and several have very large jackpots. Jackpot Giant, for example, had a jackpot sitting at $9.4 million USD at the time of this review.

If you’re familiar with Playtech, you’ll know what to expect with Sports Interaction’s slots. These games are mostly simple in nature with basic graphics but fast-moving reels and fair payout rates. Some of the games such as Buffalo Blitz are known for being very high-variance games while others are much more forgiving.

The video poker and table games are simple and straightforward. Their graphics won’t leave you in awe, but the games look realistic enough to keep you immersed in the game. Roulette has an especially strong presence here with seven different variations such as 3D roulette and another roulette table themed after ancient gods.

Other table games include craps, baccarat, casino holdem, Caribbean poker and several variations of blackjack. This covers all the major table games you would expect to find at a casino, but again, the numbers fall well short of some of the other larger online casino sites that serve Canadians.

Different tables within each game type provide different experiences. For example, the live dealer roulette area has tables for French roulette, European roulette, immersive roulette and more. Immersive roulette is particularly engaging as it has the highest video production with a beautiful studio and multiple camera angles all streamed via 200 frames-per-second HD video.

The iPoker Network sits among the top-10 among all poker networks in terms of active players. According to a recent report from PokerScout.com, average cash game players sit at around 1500 players online simultaneously. This makes iPoker a mid-sized poker network. If you’re playing poker at Sports Interaction, you will find tons of traffic at the low and mid-level games and a fair amount of traffic at the higher stakes levels.

Games are made available at all stakes for both tournaments and cash tables. Tournament players will find new tournaments running around the clock with a major Sunday lineup of guaranteed events with more than $100,000 in prizes on offer that day alone.

The flagship weekly tournament at Sports Interaction is a £30,000 guarantee hosted every Sunday. One thing to note is the iPoker network caters to players from around the world, so you will see most games listed in GBP currency.

In addition to normal freezeout tournaments, Sports Interaction poker hosts knockout events, deep stack tournaments, speed tournaments, Twister sit-n-gos with random prize pools worth as much as 1,000 times the buyin and tournament missions that reward you with free entries when you reach certain milestones such as playing in at least 3 tournaments in a week.

All iPoker rooms are based on Playtech software, which is noted for its stability and crisp graphics. The only major drawback to Playtech software is that they still have not released a Mac-friendly or no-download option. This means if you have a Mac, you will be unable to play poker at Sports Interaction at all. They have clients for Windows, Android and iOS, but nothing for Mac desktop users.

For everyone else, the poker software is a pleasure to play on. I wouldn’t go so far as to say the software is beautiful or groundbreaking, but the clean design and intuitive arrangement of buttons and various options allows the focus to stay on playing poker.

Like all major poker networks, iPoker is always on the lookout for collusion and other forms of cheating. The network is designed to detect suspicious betting patterns that may be indicative of collusion or other bad behavior. If such activity is detected, the event is flagged for manual review by a human. Over its many years in operating, the iPoker Network (and Sports Interaction by extension) has suffered no major cheating or security scandals.

Horse racing fans will be happy to know Sports Interaction offers a full-fledged racebook dedicated entirely to greyhounds and horse racing. This is different than the little “horse racing” area inside the main sportsbook which is limited to futures for major events; the racebook offers daily horse racing wagering.

The racebook at Sports Interaction follows tracks from around the world, including the United States, Canada, Australia, the UK and Ireland. Types of races covered include greyhounds, Thoroughbreds and harness races.

Betting options found online are the same as could be found in-person at the track. These include straight wagers, win/place/show wagers, exotics, daily doubles, Pick 3s, Pick 5s and more.

The simplicity of the interface is nice in some ways because it is easy to find specific tracks and races, but the downside is certain features are missing. Sports Interaction’s racebook does not support live streaming and does not offer handicapping tools such as in-depth information on specific horses or any sort of daily handicapping guide.