PlayON is a Dublin and London-based daily fantasy sports site that focuses the bulk of its efforts on markets outside the United States. In fact, PlayON is one of the only fantasy sites that opened without accepting real money customers from the USA.

PlayON takes the unique approach of only accepting real money customers from countries in which the site holds an active gaming license. However, that changed in 2018 after PlayON announced its decision to expand into the United States due to a clearer regulatory environment in the USA. 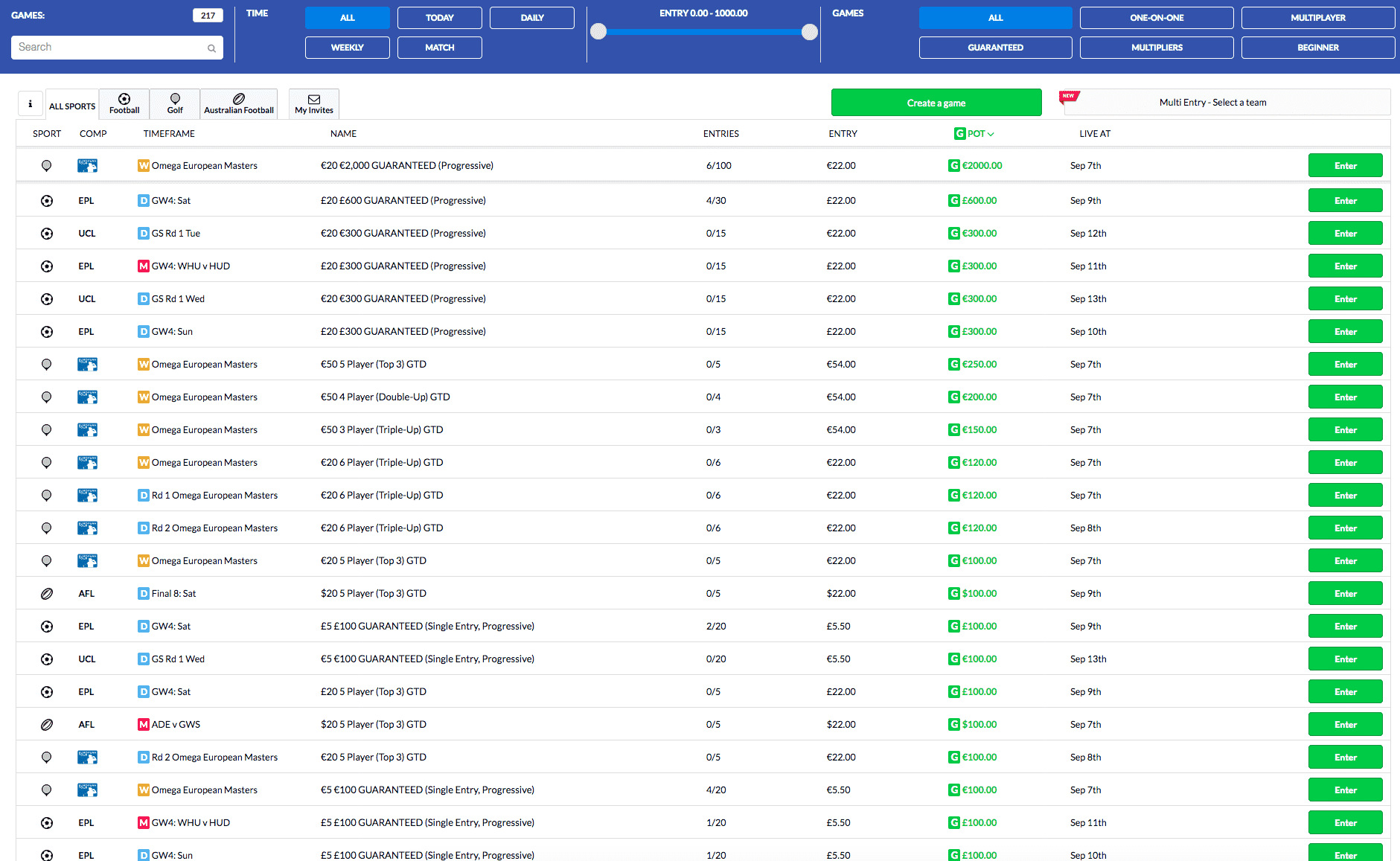 PlayON is an international daily fantasy sports site headquartered in Dublin and licensed by multiple commissions, including the UK Gambling Commission. This is one of the largest non-US fantasy sites and it offers contests on a variety of unique sports that are not typically offered by other DFS sites.

PlayON currently holds licenses from the UK Gambling Commission, the Irish Revenue and the Northern Territory Racing Commission in Australia. That means only customers from the UK, Australia and Ireland may participate in paid contests. However, players from most other parts of the world are still welcome to play in free contests that offer real money prizes.

PlayON is still a small fantasy site by American standards, but it is certainly worth a look as the site covers several sports that tend to be neglected in daily fantasy. Furthermore, all indications are that PlayON is growing at a nice clip. PlayON has been busy marketing itself to an international audience and is now the official partner of the NBA’s international leagues, European Professional Club Rugby, the European Tour of golf and the Caribbean Premier League.

Fantasy contests at PlayON can last a day, a week or longer give you £/€ 100,000,000 in virtual salary which is used to draft your fantasy team based on real-world players. Each contest is based on a day’s worth of actual matches and you are free to draft any scheduled slated to play that day, as long as they all fit within your virtual salary.

Once you have drafted a team, you can then enter that lineup into contests associated with that slate of matches. Then, your team will earn fantasy points based on your players’ performances in the real world. If one of your players scores a goal in the real world, for example, your virtual player earns 1,000 points for your team.

After all of the day’s matches have been played, point totals are added up and the contestants whose teams accumulated the most fantasy points win the contest. Real money payouts are then awarded to the top fantasy teams in each contest. You can see the PlayON point scoring rules near the end of this review.

Playing in a fantasy contest at PlayON involves logging in to your account and visiting the lobby for a list of open games. This screen shows all open contests, entry fees, prize pools, start date and a summary of how many matches each contest spans.

The lobby has a handful of useful sort and filter options that allow you to narrow down the list of contests to types that specifically interest you. For example, you can filter and sort the lobby by buyin fee, prize pool, sport, length of contest (daily / weekly) and type of contest.

Games offered in three different currencies: EUR, GBP and USD. You must have your balance in the same currency as contests you wish to enter. Currency conversions are available inside your account area, so you can always change currencies if there is a certain contest you want to play in that is being held in a different currency.

Selecting “enter” next to any contest brings you to the main drafting area. This is the screen in which you can draft your team, view game info and scoring rules, see the payout structure and invite friends.

The drafting area is rather plain, but the simplistic layout makes it easy to draft your team. Inside this area is where you’ll start picking players and trying to balance your virtual salary. Each available player has an associated price tag which is deducted from your salary. The best available players cost the most while weaker players cost less. Your goal here is to draft the most effective team possible without going over your salary cap.

You can click on the name of any player to see some of that player’s recent stats and form information. The player information screen provides useful information such as that player’s average number of fantasy points earned, how many points that player earned in each of his last few contests and a list of upcoming fixtures.

This player information screen is full of must-have information that you will use to help decide which players to draft and which to skip. This information is useful overall, but it would be nice if the PlayON software included more analysis of each player. Sites such as FanDuel and DraftKings included mini news articles, social media updates and more. This additional information and analysis would be a great addition for PlayON.

PlayON also maintains a season-long leaderboard for each sport. As you play in contests for any sport (such as Aussie-Rules contests), your three best scores to date will be added together and your points total from those three contests is used to rank you on the global leaderboard.

The leaderboard adds a bit of a season-long feel to the PlayON experience even though individual contests only last for a day or a week. At the end of each season, the first-place leaderboard finisher earns not just bragging rights, but also a US $1,000 prize while all the top-10 finishers earn cash prizes of various amounts as well.

PlayON is not offering any deposit bonuses for new customers at this time. However, the season-long leaderboards do offer cash prizes for those who perform well over the course of the season. You do not need to do anything special to qualify other than participate in contests and earn as many fantasy points as possible.

PlayON also has one of the best refer-a-friend programs in the industry. If you log in to your account and generate a referral link or send challenges to your friends, you are credited with referring those people and earn 50% commission on every entry fee they pay to enter real money contests.

You can refer friends by logging in to your account and visiting the “referrals tab” from the dropdown menu on the left side of your dashboard. From there, you can generate a unique referral link that you can share online or via text message as well as create Facebook and Twitter invitations.

PlayON takes a conservative approach to compliance and only accepts real money customers from countries in which the company holds a valid gaming license. That list currently consists of the United Kingdom, Australia and Ireland. PlayON announced in 2018 that it will begin accepting players from the United States as well.

PlayON does accept customers from most other parts of the world for free-play contests with real prizes, but those three countries are for now the only ones in which customers may participate in paid-entry contests. PlayON maintains that the company is actively seeking licenses in additional countries and will continue to expand its range of accepted countries.

A handful of countries are restricted from participating in PlayON contests whatsoever. Those include:

PlayON accepts credit and debit cards, Neteller and Skrill for deposits. The minimum deposit for all is £5 or your currency equivalent.

PlayON also supports currency exchanges. If at any time you need to transfer between EUR, GBP, USD or AUD, you can visit the “transfer currencies” section within your main player dashboard to have your balance converted to the currency of your choice at current exchange rates.

Your fantasy team in each contest earns points based on the performance of each player in that day’s games. The following tables show the point scoring rules for each sport supported by PlayON.